Is the pen truly mightier than the sword? We’ll have the chance to find out next month when three awesome authors who also happen to be martial artists drop in on VISS. 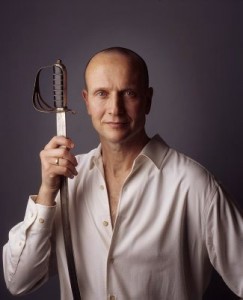 Chris (CC) Humphreys came to swordplay through his career as a stage and screen actor with fighting roles that have ranged from Roman gladiators, to Hamlet, to Richard Sheridan’s Jack Absolute. He has written a dozen books in as many years: four young adult fantasies and eight historical novels, almost all of which feature a sword fight (or three or four). Whether it’s the French Executioner’s curtana versus rapier fight, Jack Absolute’s thrilling duels, or the vivid battle scenes from Vlad: the Last Confession and A Place Called Armageddon, Chris always writes the good fight.

On Saturday Feb 16th at 10am you can hear Chris expound with Greg Mele of the Chicago Swordplay Guild on Shakespearean Swordplay: Smack talk and Dojo Busting in the Reign of Elizabeth I.

Much of the fight research for his latest work, Shakespeare’s Rebel, was conducted at VISS 2011 and those of us who traded blows or knowledge with him can hardly wait to see the results … and perhaps cross swords once more!

Neal Stephenson wrote eight highly acclaimed science fiction and historical novels, including Snow Crash, The Cryptonomicon, and the magnificent Baroque Cycle, before taking up the sword. Since becoming a scholar of swordplay he has been determined to ‘get the fight right’ in literature, and the results can be seen in his latest epic collaboration The Mongoliad. He has also taken this passion to the world of video games and is one of the driving forces behind the upcoming Clang sword fighting game.

Neal may cut a terrifying figure with his black helm, full fighting harness and longsword, but if you steel yourself for the approach you’ll find that he, Joseph, and Chris will be happy to sign books, answer questions about their writing, and talk about their love of swordplay.

“Everyone at Academie Duello is incredibly positive, friendly, enthusiastic, and involved. The school is in the heart of historic Vancouver, and Devon has made the school part of the larger community. I also want to mention the students. They were highly skilled and a joy to teach. Furthermore, no event like this is accomplished without lots of volunteer labor, and the staff who organized and helped run the event did a truly fantastic and more than professional job.”