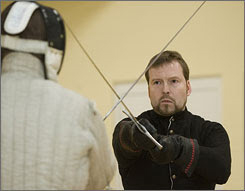 We are happy to announce that Christian Tobler, renowned instructor and researcher of historical German martial arts, will be teaching an intensive workshop at VISS 2017! Christian has been an instructor at VISS 2011, 2013, and 2015, which makes him one of a small handful of instructors who have taught at every VISS. Christian joins the ever-growing list of VISS 2017 instructors, which currently includes Tom Leoni, Ilkka Hartikainen, Matthew Howden, and Jessica Finley.

Christian is one of the best-known instructors of the Liechtenauer family of martial arts, the founder of Selohaar Fechtschule, and a leading researcher, translator, and author. His published works include In Saint George’s Name: An Anthology of Medieval German Fighting Arts, Captain of the Guild: Master Peter Falkner’s Art of Knightly Defense, Secrets of German Medieval Swordsmanship: Sigmund Ringeck’s Commentaries on Johannes Liechtenauer’s Verse, In the Service of the Duke, Fighting with the German Longsword, and several training DVDs.

To train with Christian Tobler at VISS 2017, head to our registration page and take advantage of our 20% early registration discount!