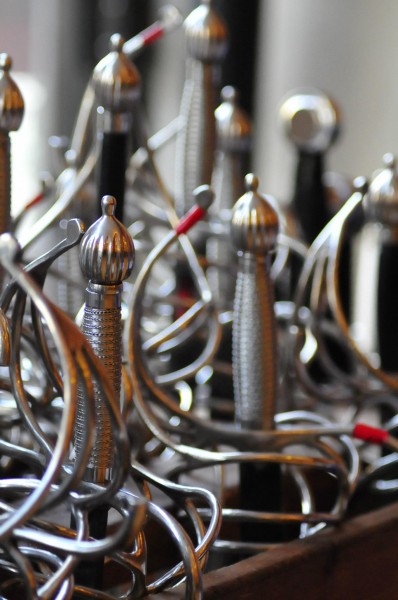 The 2017 Vancouver Swordplay Symposium is just a few weeks away! This year’s event schedule is carefully designed so that you can dive deeply into the subjects of your choosing with as few schedule conflicts as possible.

As an example, here’s what a rapier-focused schedule could look like:

In the morning, David Coblentz will be teaching the first day of his Italian rapier intensive, focusing on establishing dominant positions and exploiting the openings of the opponent’s guard. After that, you can see how it compares to Joachim Meÿer’s 16th century German rapier technique in Rob Rutherfoord’s “German vs. Italian Rapier.” In the afternoon, join Matthew Howden for day 1 of his intensive on Thibault’s rapier, an introduction to the fundamentals of a Dutch system of rapier combat based on the Spanish rapier tradition.

Saturday morning will begin with day 2 of David Coblentz’s Italian rapier intensive, which will explore different types of actions to defeat opponents based on their tactical choices. After lunch is a double dose of Thibault, starting with Matthew Howden’s “Thibault’s Rapier vs. the World.” This workshop is designed to show how Thibault advocates using a rapier against a two-handed sword, a rapier and rotella, or other weapon combinations. After that, Matthew Howden will lead day 2 of the Thibault intensive, exploring special challenges such as offhand weapons, positional disadvantages, and opponents who avoid blade contact.

On Sunday morning, the two rapier intensives come together in a combined, extra-long session co-instructed by David Coblentz and Matthew Howden. This session will explore the differences and similarities between the two systems, building off of the ideas in their previous sessions. After lunch is David Coblentz’s “Rapier: Dealing with Physical Asymmetries”, in which students can explore the ways of dealing with an opponent with a different size, greater or lesser strength, different dominant hand, or other physical asymmetries. After that, Devon Boorman’s “Rapier: Tactical Asymmetry” will explore ways of adapting to the opponent’s changing tactics in the context of a rapier fight.

In total, VISS 2017 offers 22 hours of rapier seminars in one weekend! This is our way of approaching a new level of depth in the seminar format, all in the pursuit of mastery.

END_OF_DOCUMENT_TOKEN_TO_BE_REPLACED

“It was a luminous time. Well done to all the staff and ten thousand thanks for allowing me to be a part of this grand occasion. To say I can’t wait for the next one would be the understatement of the decade.”