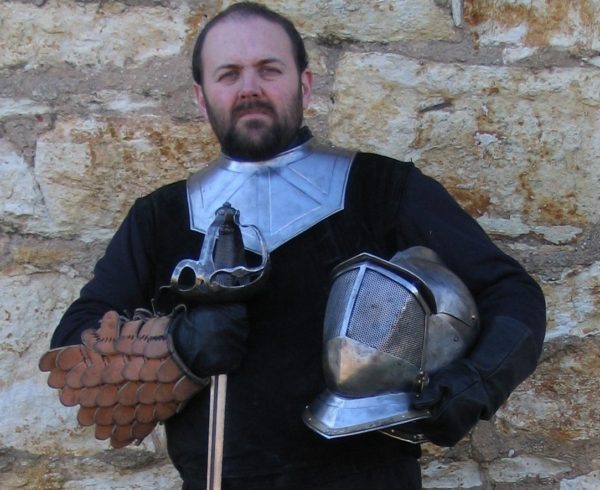 Stephen Hand was born in Tasmania, Australia in 1964.  He became interested in historical fencing through his involvement in medieval and renaissance re-enactment between 1979 and 2000.

In the mid-80s, while trying to expand his understanding of swordsmanship by studying modern sport fencing and kendo, Stephen discovered the rich tradition of historical fencing manuals and began playing around. After moving to Sydney in 1989 he began studying and teaching the Elizabethan authors, particularly George Silver and Vincentio Saviolo. In 1998 Stephen and two colleagues founded the Stoccata School of Defence, in Sydney, Australia. Stoccata is Australia’s oldest and largest HEMA club, with 12 branches over multiple states.

Stephen has written many books and articles on a range of historical fencing subjects. These have appeared in a range of publications, including Hammerterz Forum, The Journal of Western Martial Arts, Australasian Fight Times and The Fight Master. He is author of Swordplay in the Age of Shakespeare and English Swordsmanship: The True Fight of George Silver, co-author of Medieval Sword and Shield: The Combat System of Royal Armouries MS I.33, and a contributing author to Master of Defence: The works of George Silver. He was the editor of the two volumes of SPADA, anthologies of scholarly papers on the history of swordsmanship.  He contributed three papers for the first volume, released in 2003 and two for the second, released in 2005.

Stephen has taught at over 20 international WMA events throughout North America and Europe. He has also taught at the Paddy Crean Festival, the world’s largest stage combat workshop. Stephen has choreographed swordfights in a number of plays and one feature film.

In 2004 Stephen returned from Sydney to his home-town of Hobart, Tasmania, where he runs the local branch of Stoccata and hosts the annual Tasmanian Swordplay Symposium.