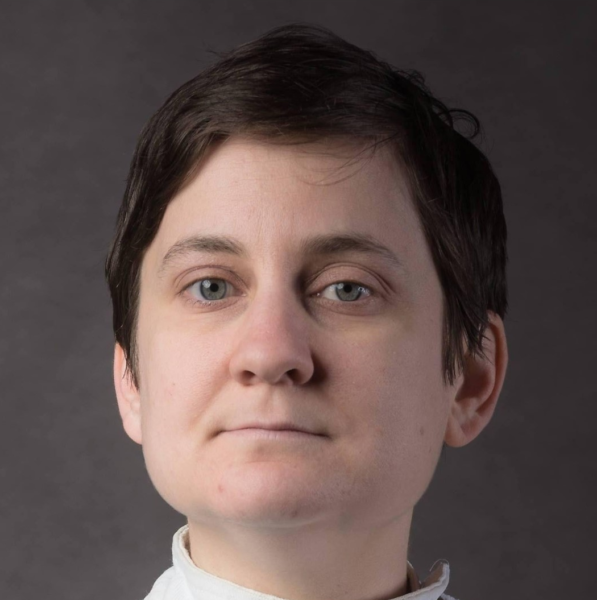 Maestra Dori Coblentz, PhD, received her master-at-arms certification through the Sonoma State Fencing Masters Certificate Program. Her doctoral research and current book project, Artful Devices on Shakespeare’s Stage, is on the contributions of fencing theory and practice to Shakespeare and Jonson’s drama. Dori’s most recent fencing pedagogy work has been within the historical fencing movement, where she is particularly interested in curriculum development.

She has published on this topic in a 2018 training manual, Fundamentals of Italian Rapier: A Modern Manual for Teachers and Students of Historical Fencing, which she co-authored with David Coblentz and is the co-founder of the Decatur School of Arms, which offers weekly classes for adult learners in rapier fencing. She also teaches weekend seminars, and has taught classes at events such as Rapier in the Rockies, Riposte Harlem, the Southeast Renaissance Fencing Open (SERFO), and the Atlanta Freifechter‘s Weekend of Tactical Decision Making.

As well, she is also an organizer for Atlanta’s Rapier and Saber Pedagogy retreat (RASP), a long weekend coaching clinics designed to bring together classical, historical, and modern practitioners and teachers.

“With all respect to San Francisco, I left my heart in Vancouver. The venue, the students, schedule… the volunteers. I just can’t believe that this was [VISS]’s maiden voyage. VISS ran with an efficiency that spoke to a much more established event. It also had a spirit that is hard to explain. If you want to see what WMA schools can be, you need to visit Academie Duello. Devon has built something that is at once professional, highly martial, cultural, educational and yet…family. That was all wonderful, and the sala is visually beautiful, but what impressed me is how much a part of a community the Academie is. I can’t say… how much I look forward to seeing you again.”